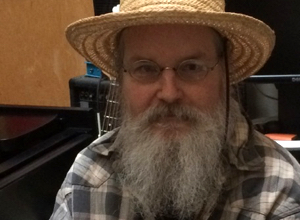 I was at Audio Research Group from September 1989 – August 1991.  I think my only paper at ARG was my Master’s thesis: Phase Cancellation in Overlap-Add Signal Reconstruction for the Pitch Shifting of Audio Signals, M.Math thesis, University of Waterloo 1991. (It contained a footnote proof of non-existence of God based on the equal-tempered major-third interval).

I remember also presenting the same sort of thing at AES in L.A. one of those years and an epic LA-SF road-trip with Rob Wannamaker, Ewan Macpherson and Kevin Kotorynski.

During my stint at ARG, I somehow coaxed John and Stan to buy a $10,000 NeXT computer (68030 cube, NeXTstep v0.9) and arranged a thickwire ethernet feed into the lab using a homemade PC (8086) router to create our own subnetwork and join the internet age.  One memorable experience was when I bought a 1979 Fender Rhodes for $250 and John helped me translate a graphic EQ setting into a filter circuit which I built into the thing.  (I still play that Rhodes daily.)

After ARG I went for my PhD to UBC to study artificial intelligence but ended up finding the real thing more satisfying and graduated in Neuroscience doing computational models of the nervous system of the nematode C. elegans.  I stayed enamoured with NeXTs and bought a bunch more from a decommissioned UBC computer science lab.  I still have a half dozen or so in storage.  Thence I worked at Siara Systems (Redback Networks) building the packet classifiers for edge routers.

I am now currently living in the bush on a BC Gulf Island helping out locals with their Macs and my wife with her market garden business while puttering on all manner of music, computers and electronics and generally trying (mostly successfully) to stay out of trouble.