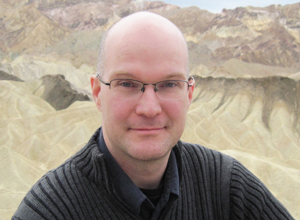 As part of the Audio Research Group, Robert Wannamaker completed an M.Sc. in Physics (1991) with John Vanderkooy, and a Ph.D. in Applied Mathematics (1997) with Stanley P. Lipshitz.  His research concerned the theory of dithered quantization and the design of psychoacoustically optimized noise-shaping multi-bit converters, technologies that became very widespread in digital audio.  He worked occasionally as a post-doctoral researcher with the ARG for two years following his graduation.

Rob subsequently completed a Ph.D. in Music Composition (2006) at the University of California, San Diego.  Since 2006 he has been Professor of Music Theory, Composition, History & Literature at the California Institute of the Arts (CalArts) in Valencia, CA, where he is currently Associate Dean of the School of Music.  As such, he is primarily occupied with the study, teaching, and making of music, mostly of extraordinarily strange varieties.  His friends from the ARG will immediately recognize how well this must suit him.  The technical skills and knowledge that he gained as part of the group continue to serve him every day as a scholar, educator and artist.

I don’t think that rappers would be rhyming about dither without the work that we did together in the ARG.

Wannamaker, R.A., and S.P. Lipshitz, “Dithered Quantizers With and Without Feedback,”  Proc. of the 1993 IEEE Workshop on Applications of Signal Processing to Audio and Acoustics, New Paltz, NY (Oct. 1993).