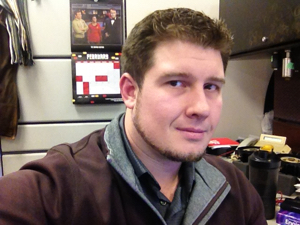 Ryan Matheson was born and raised in Thundery Bay, Ontario. He left Thunder Bay after high school to attend the University of Guelph in 2002, where he obtained his Honours Degree in Physics. After graduating from Guelph in 2007 Ryan then moved on to  the University of Waterloo where he would complete his Masters of Science in Applied Physics as a member of the Audio Research Group.

Over the two and a half years that would follow Ryan worked and learned about the physics of acoustics from his advisor and co-advisor Professors Emerita John Vanderkooy and Stanley Lipshitz. Ryan’s specific area of research was in using the numerical method known as the Finite Difference Time Domain Method, or FDTD, to investigate and solve low frequency issues in small listening rooms by using multiple subwoofer placements.

After Graduating in 2010 from the masters program Ryan has found himself in a number of different positions which all managed to leverage his acoustics knowledge. Most notably his position as a consultant in training at HGC Engineering where he participated in a variety of acoustic projects like wind farm noise monitoring, acoustic audit of industrial sites, building acoustics and construction noise and vibration.

Most recently Ryan’s experience has taken him all over North and South America with Echologics Engineering where he was involved in acoustic testing projects for water infrastructure as well as some research and development initiatives. Some of the more notable locations are Puerto Rico, New Orleans Louisiana, Ecuador, Santiago de Cali Columbia and Montreal Canada. Ryan is currently pursuing acoustic consulting and research related projects under his own company, Mathalytics.